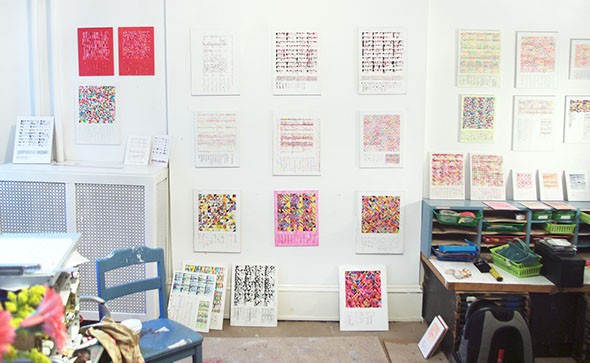 I feel like my paintings are made so simply. I have an A here, therefore I have to put a red square there. It’s just a very systematic addition of layers or divisions, going over and over each row as necessary, but eventually it becomes intricate.

Excerpted from Paintingisdead.com Leslie Roberts: . . . I had started to make paintings based on collections of language: collecting instructions from all different sources, for example, everything from how to save someone’s life to product manuals. Or lists of ways to say “no”–nope, no way, forget it–things like that. Or lists of guarantees, warnings, questions . . .

Scott Robinson: It sounds like a broad residue of everything that you experience.

LR: Right. Sometimes I feel my process is a little bit like still-life painters.' You know, they use whatever objects are around: but of course they are not just any objects. . . .

SR: Are there any other experiences that you think predispose you to working with text?

LR: For ten years I made my living as a copy editor and writer of textbooks. I am officially supposedly a good writer . . . Yet in a way, my process undercuts some of my writing agency. Collecting words that aren’t mine and stringing them together, as opposed to writing and revising and re-revising. . . . I am not formally composing. But I am kind of enjoying the rhythm as I write these lists down. I think they’re a little poetic, though they’re not poetry. They’re also funny, and sometimes a little sinister, especially when I start collecting sentences from end-user agreements and contractual language. . . .

SR: Could someone decipher these if they really wanted to?

LR: Possibly a really determined and good CIA agent! But I don’t think so. Maybe with a computer to analyze probability . . .

SR: They tend to look very digital, but it sounds like that’s a coincidence.

LR: It’s not a coincidence although it’s not planned. Again, an example of not being aware of how you’re taking control.

Or the format I’m using now, flat 3/8 inch-thick gessoed panels, rather than canvases: the flat panel felt right but it took a while for me to think through why. It’s because they are more like pages, in size and also in their thinness. They’re paintings that are leaning in the page direction. A friend here recently said these are like pages that got really thick. I loved that. Another friend said they’re like little kids’ chalkboards. They’re also like the iPads and tablets we all have now. . .

It’s very methodical, how they’re constructed, even though they look complicated. . . I feel like my paintings are made so simply. I have an A here, therefore I have to put a red square there. It’s just a very systematic addition of layers or divisions, going over and over each row as necessary, but eventually it becomes intricate.

SR: It’s interesting to me that a paradoxical part of your control is that you intentionally abandon intentional composition.

LR: Flannery O’Connor was asked about the meaning of her stories. Have you read her letters? I cannot lend them out, you have to get them because I cannot risk losing them! But about the meaning in her stories–I might be paraphrasing–she says, “I am like the little old lady who says ‘I never know what I think until I see what I say.’ ”